Who overperforms at the Paralympics? (Guest post by Will Damazer)

September 19, 2016 · by aveekbhattacharya · in Olympics, Sport · Leave a comment

Countries invest their resources into individuals to find Olympic glory, perhaps with the hope of inspiring athletic activity at the grassroots level or even to boost public morale. It’s an expensive investment that needs a large talent pool, and as a result countries with a larger GDP (i.e. those that are richer and/or have a bigger population) tend to do better. 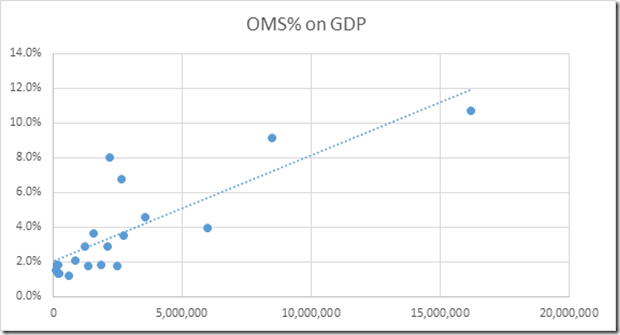 In the  scatter plot above we can not only see this relationship but also the large variation in results as countries under or over perform relative to what is expected. Countries place different weight on the importance of sport and may focus on sports with little or no presence in the Olympics.

The same factors that predict Olympic success should predict Paralympic success, but additionally attitudes and support towards disabled people in general, and disabled athletes in particular, matter. To measure these, I will look at countries’ Relative Medal Share (RMS). I’ve calculated RMS as follows:

Countries with a RMS less than 100% are underachieving in the Paralympics compared to their Olympic performance whereas those with RMS greater than 100% are overachieving. The table below shows the RMS for the countries with the highest medals share in the 2012 Olympics [1].

Roughly half the countries (9) in the top 20 are overperforming with remaining performing worse than expected. The USA notably comes in at 17th place, only achieving 60% of the medal share that they achieved in the Olympic Games. This drops to 48 when looking at a full range of countries. Even when they had the highest Paralympic Medal Share in 1996, they still underperformed with a RMS of 83%. Great Britain, by contrast, overachieves – although only slightly – winning 16% more medals than their Olympic performance in 2012 would predict. 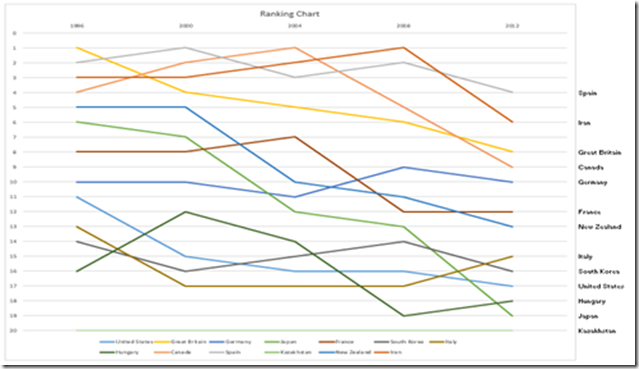 If we look at how RMS rank has changed over time we can see that typically developing countries have risen up the RMS ranking at the expense of wealthier nations. The only countries that break this pattern are Australia – who have benefited from a home Olympics effect in 2000 – and the Netherlands. Specifically developing countries that have achieved strong economic growth are improving their performance the most. All the BRIC nations (other than India) are included in this group.

In the first a possible narrative is that as the Olympics has got more competitive middle Income and wealthy countries haven’t been able to keep up. This is driving some of the rise in RMS for Ukraine, Australia and the Cuba who have all seen their OMS drop by over 25%.

However, rising Paralympic Medal Share is the much more significant factor with all of the countries seeing a rise in RMS other than Australia and the Netherlands. As middle income countries grow they first invest in Olympics before turning their attention to the Paralympics. This could reflect changing domestic attitudes to disability or instead be driven by an outward desire to impress other nations.

If the former, then we should see relative Paralympic success coming hand in hand with better relative performance for disabled populations at home. Using an OECD database on the % spent on incapacity benefit I correlated the RMS against this measure of relative domestic performance by year.

The results show no clear pattern – or perhaps even a negative relationship. The data was however  missing numerous years and may not easily be comparable across countries. Maybe the most sensible countries are those which choose to invest their resources into the disabled population in general rather than focusing on an elite few.

← What should voters look for in their politicians?
The Trumpification of foreign aid →
Follow Social Problems Are Like Maths on WordPress.com